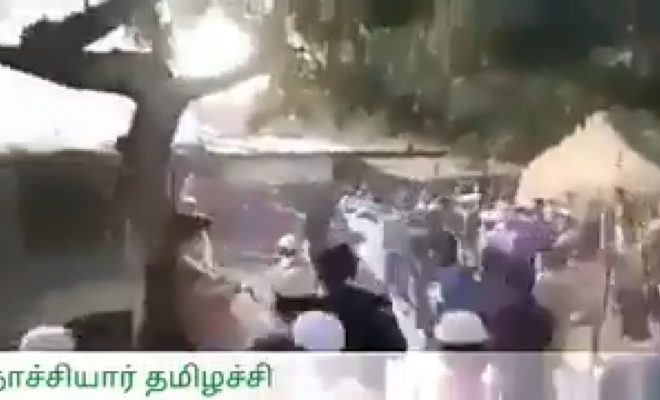 More than 30 persons were injured, three vehicles were set on fire and two shops and household items in 50 houses of Muslims were damaged in a group clash between Muslims and Dalits at a village in Theni district following a dispute over the route that a funeral procession took. The injured are being treated in private and Government hospitals in Jayamangalam and Periyakulam.

According to the police, when Vanniammal, an aged Dalit woman, died on April 24, her relatives and friends decided to take out the funeral procession through Muslim Street in Bomminaickanpatti village near Periyakulam.

They chose the new route as there was another death ritual going on in their regular route. When the procession entered the Muslim Street, some residents protested and a minor clash followed.

The police pacified both sides and the Dalits managed to complete the funeral that day. Later, the village witnessed skirmishes between the two groups.

On Saturday morning, when Syed went to his coconut farm, a section of Dalits allegedly intercepted him and told him not to go through their area. Later, heated arguments between the two groups led to a clash in which they attacked each other with stones and sticks.

Meanwhile, an unruly mob entered the Muslim Street and threw stones on the houses and shops. Two shops, including a photo studio were destroyed, police the said.

Has any Media spoke about this Horrible Incident happened against #Dalit in Tamil Nadu (Theni) ?

The neighborhood muslims have thrashed more than 50 houses & had hit senior citizens & children jus bz Dalits took a dead body to graveyard via their streetpic.twitter.com/LrViYCPOPB

A gang also barged into the houses of Muslims and damaged furniture, electronic gadgets and other items. Window panes of several houses were also damaged in stone pelting, police added.

Later, the mob set on fire a car owned by Mubarak Ali, a motorcycle owned by Murugan and an autoriskshaw owned by Ilangovan. Following this, the police cordoned off the entire village. More than 200 police personnel were deployed. Outsiders were not allowed entry. The local people were scanned before entering the village. DIG of Police (Dindigul Range) K. Joshi Nirmal Kumar and Superintendent of Police M. Baskaran inspected the village.

The Jayamangalam police have registered a case. Fearing a police backlash, several people have fled the village. The local people complained that both groups had been harbouring enmity after a portrait of VCK leader Thirumavalavan was damaged last month.