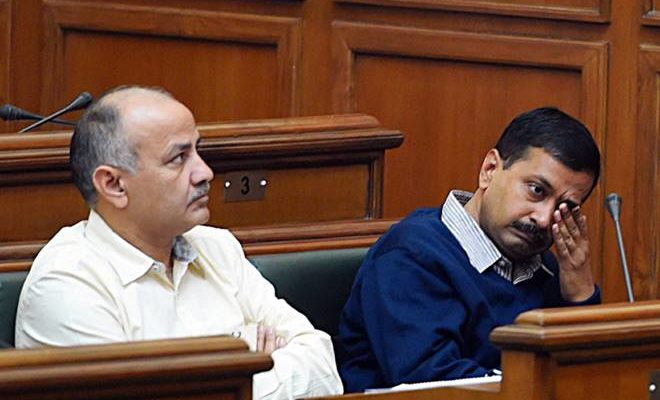 In a blow to the Aam Aadmi Party, the Election Commission had asked President Ram Nath Kovind to disqualify 20 of its MLAs for holding offices of profit, setting the stage for their ouster from the Assembly.

In its opinion sent to the president, the poll panel said the MLAs, by occupying the post of parliamentary secretaries between March 13, 2015 and September 8, 2016, held offices of profit, and were liable to be disqualified as legislators, highly-placed sources said.

Reacting to the recommendation, Delhi Deputy CM Manish Sisodia claimed that AAP hadn’t been given a chance to explain its stand and said they wanted to get the President’s view and that MLAs also wanted to meet President Kovind.

He had said: “There was no hearing, we were not given a chance to explain our stand. We appeal to the President to hear our view too, MLAs will meet President also.”

The Delhi High Court on Friday refused to grant interim relief to six AAP MLAs, who had moved a plea seeking a stay on the Election Commission’s order disqualifying 20 MLAs in the office of profit case.

During the brief hearing, the judge questioned the conduct of the MLAs before the ECI and said they did appear before the poll panel taking shield of the fact that their pleas were pending in the high court.

Justice Rekha Palli also directed the counsel for the Election Commission (EC) to take instructions as to whether a final order of disqualification has been passed by it and if the same has been forwarded to the President.

“At this stage, I am not inclined to pass any interim order. It is deemed appropriate for the respondent to find whether a final order has been passed by them and whether the same has been sent to the Honourable President,” the judge said fixing the next date of hearing to January 22.

The six AAP MLAs who had moved the court are Kailash Gehlot, Sharad Kumar, Madanlal, Nitin Tyagi, Rajesh Gupta and Somdutt. They had sought to be heard by the poll panel.

Appearing for the EC, its counsel Amit Sharma informed the court that he has no information about the order in question and so he cannot make any submissions or representation at this moment.

In a blow to Delhi’s ruling Aam Aadmi Party, the Election Commission on Friday asked the President to disqualify 20 of its MLAs for holding offices of profit, setting the stage for their ouster from the Assembly.

The development does not threaten the AAP government as it has 65 MLAs in the 70-member Assembly. Still, the BJP and Congress demanded that Chief Minister Arvind Kejriwal resign on moral grounds.

Seven of these MLAs moved the Delhi High Court challenging the EC’s recommendation but the bench headed by Acting Chief Justice Gita Mittal refused to pass any interim order.

In its opinion sent to President Ram Nath Kovind this morning, the Election Commission said the MLAs, by occupying the post of parliamentary secretaries between March 13, 2015 and September 8, 2016, held office of profit, and were liable to be disqualified as legislators, highly-placed sources said.

Parliamentary Secretaries assist ministers with their work. The AAP insisted that despite holding the office these MLAs did not take any salaries or perks.

The AAP claimed to be “victimised” in the wake of the Election Commission’s recommendation to disqualify its 20 MLAs for holding offices of profit, and asserted that it was “not afraid of elections”.

AAP Delhi unit chief Gopal Rail alleged that the poll panel failed to give the party a hearing before sending its recommendations to President Ram Nath Kovind.

“It is an undemocratic step. They are taking revenge from people of Delhi, the government and Chief Minister of Delhi” he said.

The AAP leader said the appointment of parliamentary secretaries had come up in 11 states, but only AAP was being targeted.

“This is double standard. Doesn’t the constitution apply to all? We are being victimised. It is worse than British Raj,” he said.

The case of disqualification of AAP MLAs is up for hearing at the Delhi High Court on Monday.

“We will go to all democratic fora seeking justice,” he said.

Underlining the AAP’s connect with people, Rai said, “We are not afraid of elections. People decide our destiny”.

In a blow to the ruling Aam Aadmi Party, the Election Commission had yesterday asked the president to disqualify 20 of its MLAs for holding offices of profit, setting the stage for their ouster from the assembly.

The Commission said the party MLAs, by occupying the post of parliamentary secretaries between March 13, 2015 and September 8, 2016, held offices of profit, and were liable to be disqualified as legislators, highly-placed sources said.

The Delhi BJP has begun serious parleys on the possibility of bypolls to 20 assembly segments after the Election Commission’s recommendation to disqualify 20 AAP MLAs for holding offices of profit.

The BJP leaders discussed the issue in a meeting of the party’s core committee members last night, party sources said.

“The matter was discussed in detail along with other issues like the sealing drive underway in north and south Delhi,” said a senior party leader who attended the meeting.

The ruling AAP had bagged an impressive 67 seats in the 2015 Delhi Assembly elections. Since then, two by-elections were held in which the ruling party and the BJP got one seat each.

“The BJP feels that the Election Commission’s recommendation for disqualifying 20 AAP MLAs is an opportunity to weaken the ruling party’s stranglehold in the Assembly,” the party leader said.

In a meeting attended by Delhi Congress president Ajay Maken and AICC incharge of the state unit PC Chacko, the party functionaries discussed the emerging scenario and possible elections in the 20 Assembly segments.

“The discussions centred around the disqualification of 20 MLAs and bypolls in the affected constituencies. It was decided to hold conventions in all the 20 constituencies in coming days,” said a senior party leader who attended the meeting.

The Delhi Congress will also hold a demonstration against the Kejriwal government on the issue of “corruption” on Tuesday, he said.

Chacko suggested focusing on booths in the 20 constituencies and strengthen party organisation at booth- level, he said.