/> Busted:The real data behind who owns how much in India - IndSpice 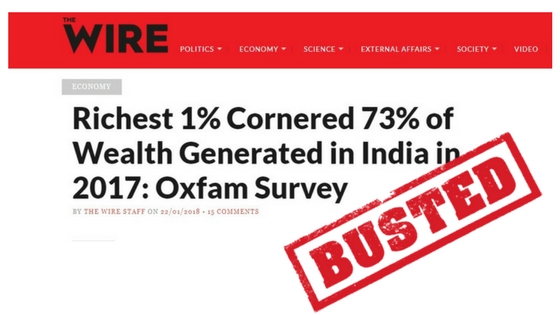 Busted:The real data behind who owns how much in India

In a stinging response to Rahul Gandhi, veteran journalist and tweeter Anand Ranganathan has taken Rahul Gandhi to task quoting the wrong numbers from the wrong source. There is no Oxfam research data for this. Rather the correct data can be found in a report of CreditSuisse, released in November 2017[1] (Table 6-5). Figure 1 shows the correct data.

The top 10% owns 73%, top 5% own 54% and the top 1% own 45%. It has become routine for Congress and its newly appointed president to shoot and scoot “facts” and not have the right data to back up the proclamations, and the same thing applies for AAP’s Arvind Kejriwal who is an expert in Shoot and Scoot

Perhaps Rahul Gandhi and Kejriwal was basing his comments on this incorrect The Wire article, which falsely claims an OxFam report as saying that the top 1% of India owns 73% of its wealth[2]. The least Wire could have done was to verify the source of their data. At the end of the post, they claim that this article is based on inputs from PTI. So who got it wrong? PTI or TheWire?

Dear PM,
Welcome to Switzerland! Please tell DAVOS why 1% of India’s population gets 73% of its wealth? I’m attaching a report for your ready reference. https://t.co/lLSNOig5pE

Now Here a Tweet from Arvind Kejriwal on the same story

Such huge inequality is undesirable for any country. It is due to faulty economic policies n crony capitalism. It existed during UPA and has further widened during NDA rule. https://t.co/3sD2MiyNYJ

Now In Series of Tweets from Anand Ranganathan Consulting Editor of NewsLaundry busted every argument that is being presented.

Income inequality is a serious issue. For a start, the Wire article quoted by you is lying, both in terms of data and who procured it. Oxfam NEVER conducted this survey. And the org that conducted it gives a TOTALLY different figure to what you quote. 1/n https://t.co/3MS3v0oKrH

3/n In its report, Credit Suisse CLEARLY mentions that 1% of India’s richest hold 45% of her wealth, and not 73%. That figure, 73%, is held by 10% of India’s richest. In fact, India fares better than China and the World as a whole. https://t.co/GMZKEGTOBs pic.twitter.com/KAajCoyTVG

4/n That Oxfam uses Credit Suisse survey and data is borne out by this Mint report (https://t.co/q0rgqexRmN).

The 2016 numbers of Oxfam and Credit Suisse, for India and the World, match perfectly. Here is the CS Global Wealth Databook 2016: https://t.co/YW2naRagdm pic.twitter.com/DixY9OMuAJ

Not one Indian journalist is asking Oxfam why it is totally silent on the fact that income inequality in India has actually REDUCED? Does Oxfam not see this as good news? Or does this not fit the narrative? https://t.co/kMNHU5YhYF

One expects @oxfamgb to be SILENT on India's Income Inequality having REDUCED.

One expects @OfficeOfRG & the media to IGNORE this fact & toe Oxfam's line to highlight something else.

But one doesn't expect @PMOIndia to OVERLOOK this laudable achievement. https://t.co/kMNHU5GH77

This is indeed a noteworthy achievement, @PMOIndia. Strange that you are not highlighting it in @davos.

Also, India is doing MUCH BETTER than the world as a whole in reducing Income/wealth inequality.

Of course, more needs to be done. But at least there is some good news on this rather bleak front. A pity that the media didn't mention this finding at all. https://t.co/kMNHU5GH77 pic.twitter.com/4lVumnU7tR

It is high time that media started behaving responsibly. Will PTI and TheWire retract their post? Will Rahul Gandhi and Kejriwal apologize to the nation for getting facts wrong?