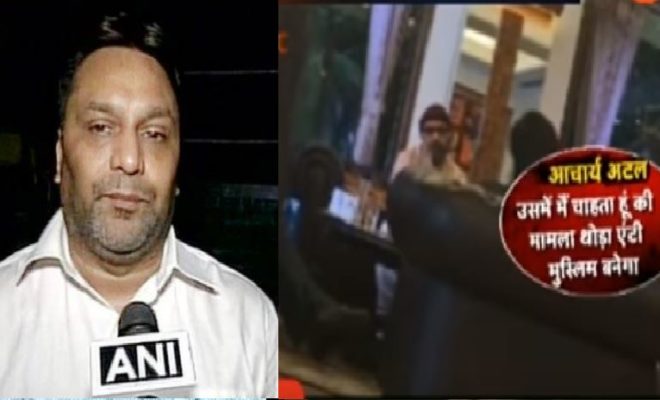 The Cobrapost journalist, who carried out the so-called sting ‘Operation 136′ on several media groups, was arrested by Delhi Police in 2009 for extorting money from government officials after staging road accidents and carrying out fake sting operations.

According to an FIR filed in Delhi’s Vasant Vihar police station on 22 November, 2009, Pushp Kumar Sharma and Pankaj Kumar, both residents of Noida, Uttar Pradesh, used to fabricate fake accident scenes on roads. As soon as the police arrived at the spot, they would, on the pretext of paying money to the victim as damages, ask for change of Rs. 500 or 1000 notes from the police officials who responded to distress calls.

These would secretly film these exchanges and subsequently Pushp Sharma would then call the concerned police officials and accuse them of extortion. Pushp Sharma, then, threatened them, saying that he had, in his possession, photographic images of them taking money.

The FIR is related to a road-accident incident in the national capital on 21 October, 2009. Head Constable (HC) Rishi Rose and Ct. Satish from Vasant Vihar police station were asked to report at the scene of a road accident near IIT Delhi. At the spot, Pankaj Kumar posed himself as complainant and stated that his car was hit from behind by motorcycle which was driven by Pushp Kumar. Once the police arrived, the duo settled the matter. Pushp Sharma then asked Head Constable Rose for change of Rs 500 to offer to Kumar as part of the settlement. The matter was settled in writing and a copy of this was also given to Rose.

After three-four days, Pushp Sharma called Rose and demanded money on the pretext of a sting operation and threatened that it would be aired on TV channel, according to the FIR. Thereafter, the police official reported the matter to his seniors and a special raiding party was set up under the supervision of ACP Vasant Vihar and the leadership of then-SHO, Vasant Vihar, Inspector Ved Parkash.

According to a statement issued by HGS Dhaliwal, then Deputy Commissioner of Police, south Delhi, on 22 November 2009, the accused blackmailers confessed that they had conducted several similar sting operations in the past. Two police officials – one head constable from police station Lodhi Colony and one sub-inspector from police station IP Estate – were listed in the FIR as targets of previous blackmail attempt by the accused.

Pushp Sharma, who led the so-called operation sting on media groups, clearly has criminal antecedents and a legal history as a blackmailer and extortionist using doctored and falsified content to ply his trade.

This is the same Pushp Sharma who was arrested by Delhi police in May 2016 for fabricating an RTI reply to publish a report claiming the government was discriminating against Muslims in recruitment of yoga trainers by the AYUSH ministry. He was at that time booked for cheating, forgery and promoting enmity between different groups.

His latest so-called sting operation on media groups has already led to a judicial rebuke for Cobrapost with the Delhi High Court on May 24 by restraining the website from releasing a part of the report at a press conference planned at the Press Club of India, New Delhi, on May 25 after an injunction was sought by the Dainik Bhaskar group. The restraint would stay ’till further orders,’ the HC said, accepting the Dainik Bhaskar group’s argument that the object of the report was ‘sensationalism’ and ‘sensational journalism.’

Another Case on Pushp Sharma for Fabrication an RTI Reply

A Delhi court on Monday sent to 14 days’ judicial custody a journalist for allegedly fabricating an RTI reply and publishing a news report claiming that the government had been discriminating against Muslims in their recruitment as yoga trainers in the Ayush Ministry.

Pushp Sharma, who was produced before Metropolitan Magistrate Ashok Kumar on expiry of his two-day judicial custody, was sent to Tihar Jail till May 30 in the case registered days after his report ‘We don’t recruit Muslims: Modi govt’s Ayush Ministry’ appeared on Milli Gazette, a fortnightly English language newspaper. The Delhi-based journalist was arrested on May 14 on charges of cheating, forgery and promoting enmity between different groups on grounds of religion, race, etc in the case registered a Kotla Mubarakpur Police Station here.

A senior police officer had said that Sharma had been arrested in 2009 on the charge of extorting government officials by threatening sting operations on them. There were also allegations that Sharma even tried to extort police officers on one occasion.

Sharma had claimed that he filed an RTI with the Ministry of Ayurveda, Yoga and Naturopathy, Unani, Siddha and Homeopathy (AYUSH) enquiring about the Muslim teachers and trainers recruited by the AYUSH Ministry for foreign assignments during the World Yoga Day last year.

Sitaram Singh
← Previous Story Teesta Setalvad to be arrested? Court Rejects bail plea of her in Fraud case
Next Story → Massive Insult to the 6.5 Crore people of Karnataka, CM says indebted to Congress not to the People of Karnataka