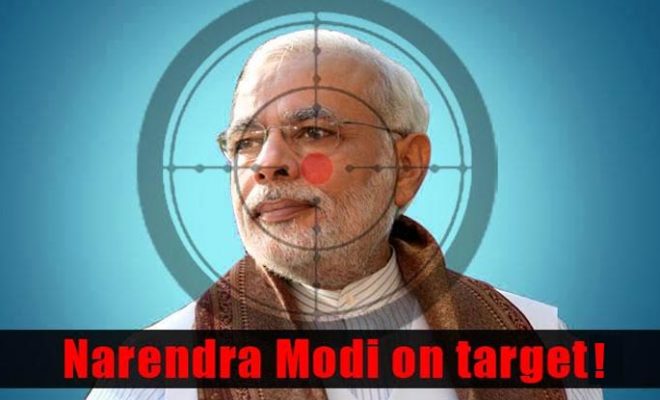 Reproduced with permission from the author.

As Dr. Swamy tweeted today, Congress has full backing of foreign Organizations guiding them to lay low until opposition join hands to defeat Modi and then pave way for Congress to come back to power.  It is quite possible in the process Modi and BJP leaders can get assassinated (like it was in Bihar during 2014 elections).

Rumor is Sonia Gandhi is in Chicago now meeting with ISI generals and it is confirmed that she went to Russia before Modi’s visit to Russia. What are the purpose of these visits?

Modi is increasingly taking many risks and has to resist the temptation of getting too close to public where his security cannot be guaranteed.    Adulation of people is too tempting to any leader and it can also be a death sentence.   Modi ji as well as Amit Shah ji should not forget what happened to Benazir Bhutto, Rajiv Gandhi, Robert Kennedy and others.

I) Who will be the hired agents for the assassinations?

1) ISI – Modi is a thorn on Pakistan establishment because he has successfully isolated Pakistan internationally.   With him at helm, they do not have the ability to slowly chip away and subjugate India.   They cannot answer to their own people while Modi is improving India economically and they are eating away their country.

2) Church/Foreign NGOs:   Narendra Modi is a leader of Pagans and he needs to be eliminated because he is an obstruction for conversions.  Simple as that.   As Indians move to middle class and upper levels because of his development activities, it will become increasingly costly to entice, fool and convert.    Sonia Gandhi is viewed as Constantipole of India who will deliver India just like Constantinople delivered Europe and she and her family needs to be in their rightful place as before.

This is not far fetched thinking, see this presentation on how Church and  Sonia Congress Rajya Sabha member and head of World Vision, Radha Kant Nayak,  meticulously planned and assassinated Swami Laxmananda in 2008 because his work has become a thorn for conversions.   It is interesting what they said in the Church planning meeting notes that it is resolved to sacrifice Swami Laxmananda for the pleasure of the Lord on pagan festival day, Krishna Janmashtami, for his satanic activities (of obstructing conversions).  Swami ji himself named Radha Kant Nayak in an FIR during one of the nine attempts that were made to assassinate him.

3) Islamic Organizations:   Islamists have an India problem.   While rest of the middle East and good part of South Asia could be easily Islamized, it is taking too long to Islamize India and Modi is going to make this lot more difficult.   They thought their job was done when Sonia (through Manmohan) declared Muslims have first right to India’s resources (i.,e rest of Indians are dhimmis) and terrorists (SIMI etc) who were having field day bombing infidels worship places across the country were declared as Social Service Organizations doing service to humanity.  (See this, ‘India’s Killing Fields, under Sonia Gandhi).

4) For hire international assassins:   These can be KGB remnants or other international thuggish organizations.
II) What methods will be used for assassination?

2) Benazir Bhutto and John F Kennedy Style:   Using long shot guns or suicide attackers ram into Modi’s caravan.  Modi will give lot of opportunities with his penchant for meeting with people during 2019 elections in open jeeps and shaking hands.   Amit Shah, whose job is to run the election campaign and he will give lot more opportunities.

3) Indira Gandhi Style:   Inside job where over the years agents will be brought closest to Modi to assassinate him.
4) Rajiv Gandhi Style:    Hired suicide attackers when Modi gives opportunities such as shaking hands with people etc.
5) Rajiv Dixit (Baba Ramdev aide) style:   Slow poisoning using those closest to Modi.
6) Pramod Mahajan Style:   Inside job using those closest to him
7) Sanjay Gandhi/YSR Style:  Plant devices in his helicopters or even air plane.
8)Kim Jong-nam (brother of North Korea Leader) style:   Smearing nerve agents.
9) Bihar Style:  Make field open to terrorists by removing proper protections to the leaders like was done in Bihar during 2014 elections when devices were planted right underneath the Stage where Modi and many other BJP leaders were speaking,  perhaps accomplished in one of the opposition ruled states!!
10) Madhav Rao Scindia style:   In plane crash where pilot found out there is no fuel after going up in the air!   Scindia is believed to be once Sonia’s boyfriend and one of those congress party members killed on the way to Sonia capturing Congress reins.   Is KGB, who eliminates targets and make it look as accident involved?
11) Jitendra Prasad style:  “Died” in car accident just two months after constesting Sonia Gandhi in the party elections in Nov 2000.    KGB or Opus Dei (Vatican secret police)?

If Modi/BJP lose 2019, every and any possible attempt will be made to eliminate the key leaders of BJP, particularly Modi and Amit Shah so that India does not face this problem again!!

III) How will it all be Orchestrated?
First there will be this news both nationally and internationally that Indian elections has become increasingly unsafe.   There will be fake attempts, perhaps Sonia and other Congress leaders with calls for protecting Sonia/Rahul and how their family members were themselves victims and how much their family has sacrificed for the nation.  It will start slow with spin stories and momentum growing on the noisy and increasingly risky Indian election scene.  International organizations will call on Modi and BJP to make India safe for elections.
This will go along with extremely meticulous planning watching the patterns of the leaders and their interactions in public and what should be the media exercise be both nationally and internationally post assassination.  Once the job is done,  there will be calls for saving Indian democracy and spin stories on how Modi  or Amit Shah called this upon themselves by not paying attention to their own security .   New York Times, Washington Post, extremely well paid (bribed) Indian and Western Journalists will be fed the stories that need to be printed and  TV anchors to regurgitate.    Everything possible to divert country’s attention will be made and prominent people (like the ‘return the rewards’) of India will appear that it is sad day for India, however India cannot be stuck with this and has  to move on.
Before we know the country is back to Sonia family.  Vatican Opus Dei/Foreign NGOs will celebrate the ‘Constantinople’ moment and ISI will celebrate the ‘Direct Action Day’, moment and Islamists will celebrate the ‘victory of Battle of Panipat’ moment and Opposition parties will be happy to play satellites for the great Gandhi family like they did with Mughals/European colonizers in the past and thank Sonia Gandhi family for saving this nation from Modi and rest of the Indians will go back to voting based on religion/caste/language and daily fighting for the increasingly smaller pie that is the left over after the looters had their share.
Jai Hind.!!!

———- Forwarded message ———-
From: Gautam
Date: Sat, Jun 2, 2018 at 1:14 PM
Subject: Re: Good post on 2019
To:
Cc:
India has entered a phase of undeclared civil war with the Opposition enjoying a massive advantage because of sophisticated and capable foreign backing. Against this the nationalist camp has Modi’s popularity, a range of positive achievements that have impacted the lives of many and the possibility of a major move like laying the foundation stone of Ram Mandir after October. But the NDA itself is heavily infiltrated and the bureaucracy is deeply resentful and sabotaging on a major scale (eg. in UP). Victory is not guaranteed and Modi’s assassination will result in rout for remnants of the nationalist camp. This is the fourth battle of Panipat. I also happen to know some deeply embedded within the Modi camp who are working for hostile powers, but cannot get through any longer to warn the relevant people.