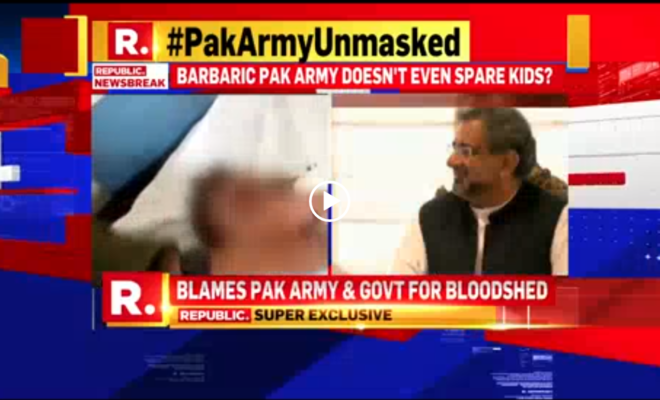 In a massive embarrassment for Pakistan government, Republic has accessed a chilling video from Waziristan, where a civilian exposes the Pakistan Army along with holding the government responsible for the terror and bloodshed in certain regions of the country.

In a two-minute video, the civilian lashes out at the Pakistan Army Chief, Pakistan Government and Pakistan Tehreek-e-Insaf (PTI) Chief Imran Khan.

During the course of the video, the civilian says, “the face of this child is not ugly. What is ugly is every Pakistani’s face who chooses to raise his voice for Kasur’s Zainab but ignores these children. And the killer of these children is the government and the governance. the killers of these children are Bajwa saab(Pak army chief General Qamar Javed Bajwa), Abbasi saab (Pakistan prime minister Shahid Abbasi), Imran Khan,  Asfandyar (Awami National Party central president Asfandyar Wali Khan) and Maulana Rehman saab (Jamiat Ulema-e-Islam- Fazl Chief Maulana Fazlur Rehman). This is not the first time.“