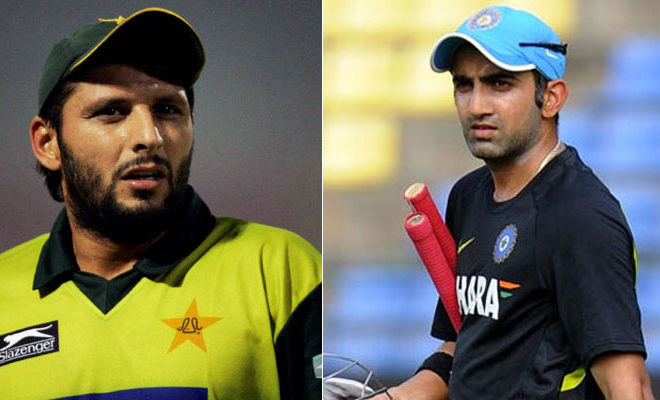 Gautam Gambhir hits back at Shahid Afridi over Kashmir tweet

Media called me for reaction on @SAfridiOfficial tweet on OUR Kashmir & @UN. What’s there to say? Afridi is only looking for @UN which in his retarded dictionary means “UNDER NINTEEN” his age bracket. Media can relax, @SAfridiOfficial is celebrating a dismissal off a no- ball!!!

Gambhir was responding to a tweet by Afridi where he had asked the United Nations to intervene in “Indian Occupied Kashmir” to stop the killing of “innocents”.
“Innocents being shot down by oppressive regime to clamp voice of self-determination and independence,” he tweeted.

Appalling and worrisome situation ongoing in the Indian Occupied Kashmir.Innocents being shot down by oppressive regime to clamp voice of self determination & independence. Wonder where is the @UN & other int bodies & why aren’t they making efforts to stop this bloodshed?

On Sunday, 13 terrorists were killed in the Valley in one of the biggest security operations in recent history.

Considered to be one of the biggest counter-offensives in recent times against terror groups operating in the Kashmir Valley, the operations rendered a severe dent to terror groups such as Hizbul Mujahideen and the Lashkar-e-Taiba.
In the operations, which were conducted over the weekend in three separate locations in the Valley, 12 terrorists were killed, one was captured alive and four civilians lost their lives in the ensuing stone-pelting. Three jawans were also martyred in the gun battle with the terrorists.
Cricketer-turned-politician Imran Khan, too, tweeted against the crackdown on terror groups. “The people of Pakistan stand with the Kashmiris democratic struggle for self-determination,” Khan said in a tweet.