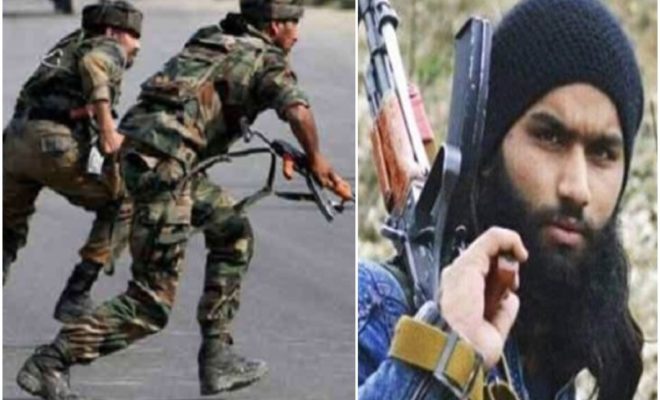 The video had surfaced on social media, following which reports of the terrorist being gunned down by Major Rohit Shukla emerged.The encounter in Jammu and Kashmir was led by Major Rohit Shukla. The Major was also injured in the encounter while another armyman suffered bullet injuries. They were evacuated and airlifted to Srinagar’s 92 base hospital of the Army.

Bhat was also known as ‘Abbasi’ and ‘Faisal’. He met his end in the village after a six-hour gunbattle around 2.15 pm, as per reports. The morning began with security forces, acting on a tip-off that militants were holed up inside a house, cordoning the area. Around noon, security personnel, who were fighting stone pelting from the civilians, fired heavily at the house, causing an explosion.

About an hour later, the first militant, identified as Aaquib Mushtaq, was killed. He was a local resident belonging to Rajpora area of Pulwama. Shortly after, Bhat, who is alleged to have carried out several political and civilian killings in Pulwama area, was gunned down.

Bhat had hit the national limelight in November 2017 after his photograph posing with an American M4 carbine in an orchard somewhere in south Kashmir had gone viral. The photo was circulated widely on social media. The Class 8 dropout had emerged as another poster boy for the Hizbul after the death of terrorist Burhan Wani in July 2016.

Three months before that, Bhat was picked up by J&K police in March 2016 after he was caught pelting stones on security personnel. He was just 18 years old at the time.

He was then counselled by police for nearly two weeks and let off with a condition that he would continue with his studies. Instead, one day, not very long after, his parents approached the Drabgam police station and registered a missing report about their son.

Bhat had fled into the jungles of adjoining Tral and joined the Hizbul terrorist group besides extending help to other terror outfits.