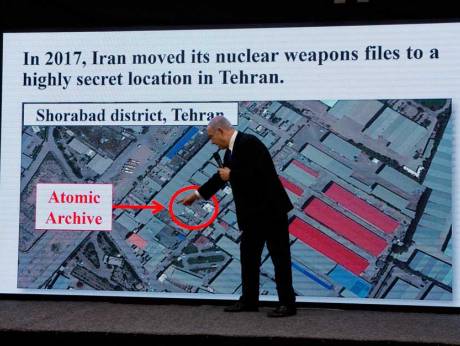 Presenting 55,000 pages of documents and 183 CDs, Netanyahu said Iran hid an “atomic archive” of documents on its nuclear program.

“This is an original Iranian presentation from these files,” Netanyahu said, stressing that “the mission statement is to design, produce and test five warheads with 10 kiloton of TNT yield for integration on missiles.”

Intelligence experts and diplomats said he did not seem to have presented a “smoking gun” showing that Iran had violated the terms of the agreement, although he may have helped make a case on behalf of skeptics in the U.S. who want to scrap it.

Iran is “blatantly lying” when it says it doesn’t have a nuclear program, Netanyahu claimed, laying out what he claimed was proof Iran had developed and continued to develop its nuclear program.

At the press conference, Netanyahu exposed a secret Iranian nuclear project, codenamed “Amad,” which he said had been shelved in 2003, though he said work in the field had continued.

“After signing the nuclear deal in 2015, Iran intensified its efforts to hide its secret files,” Netanyahu said. “In 2017 Iran moved its nuclear weapons files to a highly secret location in Tehran.”

The documents show that Iran’s Fordow nuclear plant was “designed from the get go for nuclear weapons for project Amad,” claimed Netanyahu.

“We can now prove that project Amad was a comprehensive program to design, build and test nuclear weapons,” he said. “We can also prove that Iran is secretly storing project Amad material to use at a time of its choice to develop nuclear weapons.” Dr. Mohsen Fakhrizdeh is the head of project Amad.
Netanyahu concluded by saying “Iran lied about never having a secret nuclear program. Secondly, even after the deal, it continued to expand its nuclear program for future use. Thirdly, Iran lied by not coming clean to the IAEA,” he said, adding that, “the nuclear deal is based on lies based on Iranian deception.”

A diplomatic source who spoke with Haaretz said that if the international nuclear watchdog had the details provided by Netanyahu on Monday then the Iran deal would never have taken place because the deal was conditioned on an IAEA report that cleared Iran of military nuclear activity. Iran reported there were no such activities and on the basis of those lies, the official said, Iran got a clean bill.
U.S. President Donald Trump, who spoke publicly 30 minutes after Netanyahu’s speech, said that Netanyahu’s speech “showed that I was 100% right” in criticizing the nuclear deal.

Prior to Netanyahu’s conference, Trump spoke with Netanyahu over the phone on Sunday to discuss the current situation in the Middle East, the White House said. The reach out of their phone conversation stated that they “discussed the continuing threats and challenges facing the Middle East region, especially the problems posed by the Iranian regime’s destabilizing activities.”

In a rare move, Netanyahu called the heads of Israel’s two news broadcasts and updated them with the content of his planned statement.

Netanyahu spoke on the phone this evening with French President Emmanuel Macron and German Chancellor Angela Merkel about the information he revealed concerning Iran’s nuclear weapons program. Netanyahu’s office said on Twitter that Israel “will send in the coming days professional teams that will share with Germany and France the detailed material Israel obtained on Iran’s efforts to obtain a nuclear weapon.”

Netanyahu also spoke to Russian president Vladimir Putin about the archive. The two discussed Syria and agreed to meet as soon as possible.

Javad Zarif, Iran’s foreign minister, said before Netanyahu’s speech that the prime minister is just “the boy who can’t stop crying wolf at it again.”

Netanyahu’s speech comes after an airstrike in Syria Sunday night in which 200 missiles were destroyed and 11 Iranians were killed, according to pro-Assad sources. Various reports attribute the strike to Israel, but the origin of the attack remains unconfirmed.
According to several Syrian media outlets, the strikes targeted the 47th Brigade base in the southern Hama district, a military facility in northwestern Hama, and a facility north of the Aleppo International Airport. The strike reportedly targeted an arms depot of missiles.

The strikes came as tensions increase between Israel and Iran in Syria and the U.S. deadline on Iranian sanctions regarding the nuclear deal, May 12, draws near.
Israeli defense and political sources told Russia and the United States on Sunday that if Iran attacks Israel from Syria, either itself or through its proxy, Hezbollah, Jerusalem will respond forcefully and target Iranian soil.

Later, Iran’s deputy foreign minister said that the current terms of the Iran deal are no longer sustainable for them- regardless of whether or not the U.S. ends the deal.

“The status quo of the deal is simply not sustainable for us, whether or not the Americans get out of the deal,” Deputy Foreign Minister Abbas Araghchi said, according to Iranian news agency Isna.
Meanwhile, world leaders such as France’s Emmanuel Macron and Germany’s Angela Merkel have visited U.S. President Trump in an attempt to convince him to maintain the terms of the nuclear deal, termed the Joint Comprehensive Plan of Action (JCPOA).

Trump spoke with Netanyahu, who vocally opposes the deal, over the phone on Sunday to discuss the current situation in the Middle East, the White House said. The readout of their phone conversation stated that they “discussed the continuing threats and challenges facing the Middle East region, especially the problems posed by the Iranian regime’s destabilizing activities.”

Visiting in Israel Sunday, U.S. Secretary of State Mike Pompeo said the United States will cancel the Iran nuclear deal if it is not fixed. Pompeo made the statement following a meeting with Prime Minister Benjamin Netanyahu.

Speaking to reporters after the meeting, which took place at the Israeli military headquarters in Tel Aviv, Pompeo said the U.S. stands with Israel against Iran. “We remain deeply concerned about Iran’s dangerous escalation of threats toward Israel and the region,” Pompeo said, adding that the U.S. supports Israel’s right to defend itself.