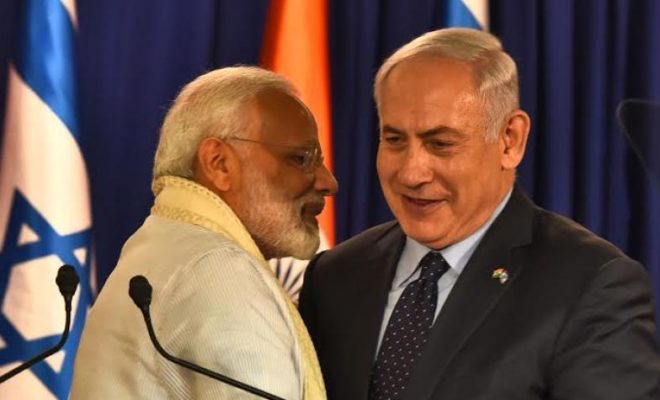 Speaking after a two-hour meeting, Netanyahu said he was “deeply moved” by the honor “shown the people of Israel and the State of Israel” in the welcome ceremony held at the presidential palace.

“You are a revolutionary leader in the best sense of the word ‘revolution,’” Netanyahu said, noting that Modi’s visit over the summer was the first visit by an Indian leader to Israel “in 3,000 years of our own sovereign existence and our history.”
Noting that Israel and India have had diplomatic relations for 25 years, Netanyahu said that “something different is happening now because of your leadership and because of our partnership.”

Netanyahu said he spoke with Modi about cooperation in all fields, including defense, “so that our people are always safe and always secure. Indians and Israelis know too well the pain of terrorist attacks,” he said. We remember the horrific savagery in Mumbai. We grit our teeth, we fight back, we never give in.”

Modi greeted Netanyahu warmly, hugging him and greeting him in Hebrew, “Dear friend, welcome to India.”

Modi said of Netanyahu, “I have a counterpart who is equally committed to taking the India-Irael relationship to soaring new heights.”

Netanyahu ended his statement by joking to Modi, a yoga aficionado, that “any time you want to do a yoga class with me, it’s a big stretch, but I’ll be there. Trust me.”

Following the meeting, the two sides issued a joint statement referring to the ties between the two countries as a “strategic relationship.”

“The two Prime Ministers share a common vision for the relationship,” the statement said. “They believe that in the next 25 years, the two respective countries should strive to raise bilateral cooperation in diverse sectors to a qualitatively new level in consonance with our Strategic Partnership.”

The statement said that the two leaders “reiterated that there can be no justification for acts of terror on any grounds whatsoever and advocated strong measures against terrorists, terror organizations, those who sponsor, encourage or finance terrorism or provide sanctuary to terrorists and terror groups.”

The statement included a carefully worded paragraph on the Israeli-Palestinian peace process that did not mention a two-state solution. “They reaffirmed their support for an early resumption of peace talks between Israelis and Palestinians for arriving at a comprehensive negotiated solution on all outstanding issues, based on mutual recognition and effective security arrangements for establishing a just and durable peace in the region,” the statement read.

Before the statements, the two leaders witnessed the signing of nine different agreements meant to enhance cooperation across a variety of different fields.

These covered everything from a Memorandum of Understanding on cybersecurity, which aims to promote cooperation through training programs, skill development, and “simulation-based hands-on training,” to a MoU on exploring the opportunities for bilateral engagements in the oil and gas field.

In addition, an agreement was signed to establish a framework for film co-production, and another one envisioning cooperation in the field of Homeopathic medical research.

Modi agreed to open trade discussions, Indian foreign ministry secretary in charge of economic relations Vijay Gokhale told reporters. “A delegation from the commerce ministry will actually go next month for discussions on trade,” he said.

Bilateral trade has jumped from $200 million in 1992, when the two countries opened diplomatic relations, to $4.16 billion in 2016, largely in favor of Israel.

Netanyahu, accompanied by a 130-member delegation, wants to increase exports to India by 25 percent over the three years.

Israel has emerged as one of India’s biggest suppliers of weapons alongside the United States and long-term partner Russia.

But the two sides were tight-lipped over the fate of a $500 million deal to buy anti-tank missiles from Israel’s state-owned defense contractor Rafael that India called off just weeks before Netanyahu’s first.

The Indian government wanted to support a local program to build the missile but Israel has since pushed hard to revive the order. It has offered to transfer technology and eventually build the missile with a local partner in a boost for Modi’s signature Make-in-India drive for a domestic defense base.

Without referring to the anti-tank missile deal, Modi said he had invited Israeli companies to take advantage of India’s liberalized rules in the defense sector to “make more in India with our companies.”