/> Karma hits back? How the 22 years old story Haunts back Congress and Deve Gowda in Karnataka - IndSpice 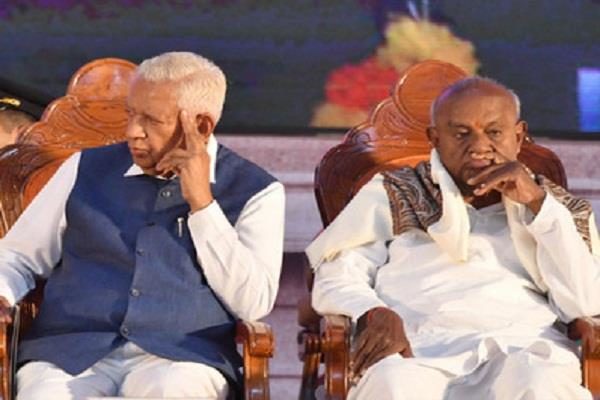 Karma hits back? How the 22 years old story Haunts back Congress and Deve Gowda in Karnataka

With neither the Congress nor the BJP seeing a clear path to government formation in Karnataka, all eyes are now on governor Vajubhai Vala, the former Gujarat BJP leader who had once vacated his seat for Narendra Modi and later served as Finance Minister in CM Modi’s cabinet.

Vajubhai would also recall this episode from the years gone by.

The year was 1996 & the Gujarat state BJP govt had just fallen thanks to Congress’ Governor Krishnapal Singh. Vaghela along with his deputy Dilip Parikh (MLA from , maternal grandmother’s birthplace, Dhandhuka) were the masterminds who had open support of Congress to split the BJP & bring the state BJP govt down. They along with Congress resorted to violence inside the state assembly where a no-confidence motion was to be voted & which in all probability was certain tob defeated. Speaker suspended entire opposition for a day. Motion was tabled & govt proved its numbers. But here comes the twist:

Congress Governor declares based on the pandemonium by Congress + Vaghela faction that the law & order machinery had collapsed in the entire state & that there was a constitutional crisis. After having surpassed his constitutional reach & jumping into the executive’s functioning, he sent a report to the central govt. Within 15 minutes of the file reaching the then PM’s table, state govt of Gujarat was dismissed & President’s rule imposed. This immediately after having proved majority on the floor of the house. Vaghela later became CM for just a yea, was succeeded by Parikh who remained CM for 2.5 months. Congress pulled out support from both. Fresh elections were held. Vaghela’s strength reduced from 47 to 4, Congress was kicked out & Keshubhai was voted back as CM.

How is this story relevant after 22 years in Karnataka? Because those quoting verses of morality, constitutional ethics & conventions were perpetrators of murdering democracy & numerous elected govts. right from Nehru.

The Gujarat state BJP chief in 1996 was Vajubhai Vala who today is the Governor of Karnataka. And the PM who imposed President rule was none other than HD Deve Gowda. Cong-JDS today want Vajubhai to be merciful reminding him of his duty. But then there’s Karma- Catches all, spares none.