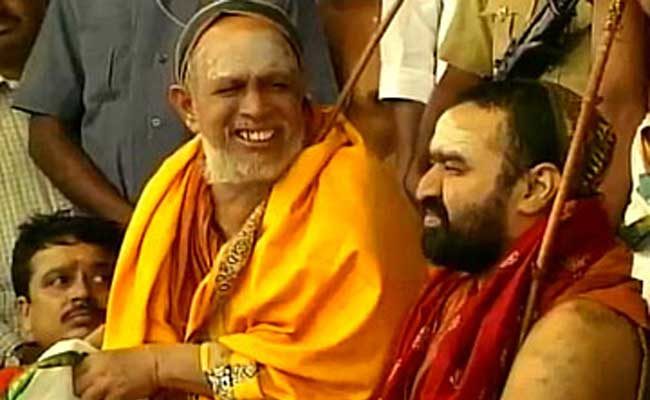 If we see the max of Indian Media houses they run stories on Illusion or Narratives which suits there agenda.

Now here is an Incident that was posted by News18 in which their Title Mentions how Swami Vijayendra Saraswathi(Who is the 70th Jagadguru of Kanchi Kamakoti Peetam, Kanchipuram) Does Not Stand up for Tamil Anthem, Faces Flak Online

and then the story Continued Below as you can read

Swami Vijayendra Saraswathi is at the center of a controversy after he did not stand up for the Tamil anthem at an event in the city on Tuesday.

A video of the Kanchi Shankaracharya sitting, while the governor and other dignitaries stood up for the Tamil Thai Vazhtu (Invocation to Tamil Mother), has gone viral.

If News18 Deletes the Video then Here’s What they uploaded

The spiritual leader is facing backlash on social media as he stood up for the national anthem but not the Tamil state song. The incident took place during an event at the Music Academy in the city.

Vijayendra Saraswathi is the 70th Shankaracharya Guru of the Kanchi Kamakoti Peetham. Interestingly, the state BJP president, Tamilisai Soundararajan and even the ruling AIADMK have refused to comment on the issue.

Media houses to Rescue themselves later on added lines which are marked as Bold Below this line, As  Soon Kanchi Mutt Issues Clarification and which was even visible in the video that he was Meditating while the whole scenario took place.

Talking to News18, a senior Kanchipuram Mutt member has said that the Shankaracharya was meditating while the anthem was playing, hence he did not stand up for it.

Didn’t Media rushed in a too much of hurry to run news on Swami Vijayendra Saraswathi(Who is the 70th Jagadguru of Kanchi Kamakoti Peetam, Kanchipuram) before verifying it or Clarification? but well then how will they get TRP.

To me there is no logical reason for Kanchi Sankara Mutt Junior pontiff to remain seated during the Tamizh Thaai Vaazthu. Saying he was in dhyana does not seem to be a plausible reason.He did stand for National Anthem as photos show. An apology is called for.

Patriotism is not paying a bribe,keeping my country clean,devoting time to civic issues,so many more things.Not just singing national anthem

Here is another Reaction who has some suggestion for media

The video evidence Shabbir and Savukku tweeted points out very clearly that Kanchi Sankaracharya was indeed in deep meditation. Their kollywood style protest is silly. They should respect our Acharyas. @Savitritvs @DrShobha @MarioPuzo901 @Ethirajans

Krish Vaidya
← Previous Story Shoe Hurled at Asaduddin Owaisi in Mumbai
Next Story → Sitaram Yechury wants to impeach CJI,Swamy has a suggestion for him