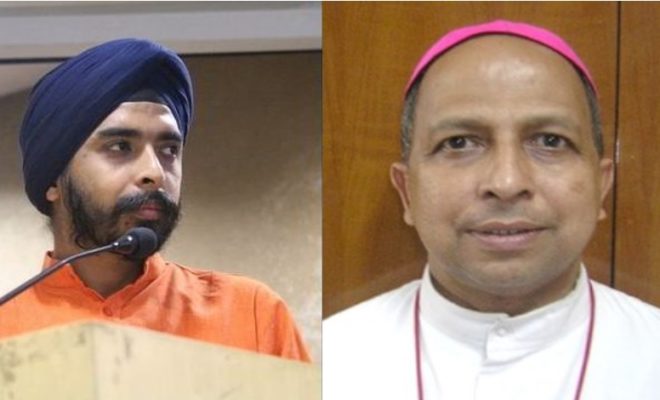 With the archbishop of Delhi causing a huge controversy by issuing a letter highlighting ‘political turbulence’ and calling citizens to pray for the country, the Delhi BJP’s spokesperson Tajinder Pal Singh Bagga has taken exception and entered the debate.

Bagga, known for being outspoken, has purchased a bouquet of flowers for Archbishop Anil Couto and sent it to him at his New Delhi address. The flowers have been ordered from BookMyFlowers and come along with the message ‘Get well soon Mamu’.

The order receipt gives us the type of bouquet (Vivid).

The Delhi BJP has also issued a statement over the matter, writing:

“Delhi BJP Spokesperson Tajinder Pal Singh Bagga has said that it seems Archbishop of Delhi Shri Anil Cuoto letter of prayer to Christians seems to be a reaction to Centre Government’s vigil which has resulted in severe restrictions on international funding of N.G.O’s which were indulging in religious conversion especially of Hindus & Sikhs in North Indian states like Punjab & Delhi.

Shri Bagga today sent a Bunch of Flowers along with a GET WELL SOON Greetings Card to the Archbishop of Delhi Shri Anil Couto with a prayer that he keeps dignity of his post.”

Speaking to Republic TV on Tuesday, Archbishop Anil Couto had defended his letter and his actions, confirming that they had come about based on the ‘current context’ and even cited ‘pressure on the judiciary’ and ‘interference in education institutions’. He said that he wasn’t interfering but the Church had a role to play.