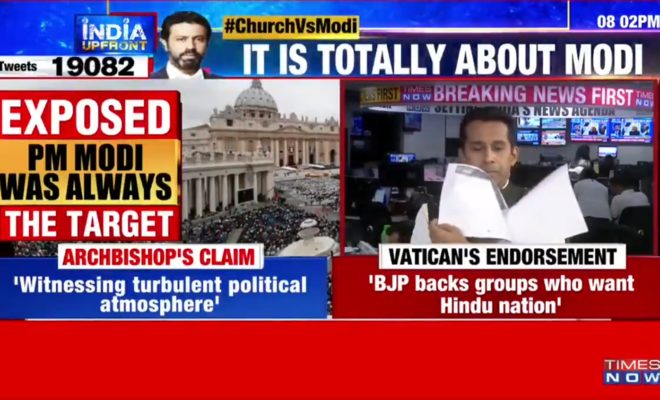 Hitting out at the Archbishop of Delhi over his letter cautioning against threat from “turbulent political atmosphere” in the country, the Vishwa Hindu Parishad (VHP) on Tuesday termed it as a “direct attack by the Church on India’s secularism”.

VHP’s international working president Alok Kumar also alleged that it was a direct intervention of the Vatican, the headquarters of the Roman Catholic Church, and an attempt to divide India on the basis of religion.

“This is a direct attack by the Church on India’s secularism and democracy… This is a direct intervention by the Vatican as these Bishops are appointed by the Pope. Their accountability is not to India, but to the Pope,” Kumar said.

He was speaking to reporters during his maiden visit to the city after being elected to the post last month.

The Archbishop of Delhi, Anil Couto, has written a letter to all parish priests and religious institutions in the Delhi archdiocese, in which he said a “turbulent political atmosphere” in the country posed a threat to India’s constitutional principles and secular fabric.

Bishop agrees that Conversions are taking place everyplace but under Modi rule it has reduced.

Where is the conversion taking place? We have come down to 2.3%, says Bishop Theodore Mascarenhas, Sec Gen, Catholic Bishops' Conference of India #ChurchVsModi pic.twitter.com/20VYOBRRni

It’s interesting and shocking to see that even after govt tightened funds from everywhere still they are able to run to conversions and it only affected them with 0.4% that is the most shocking part. How are they still getting funds? Haven’t govt agencies tightened the Funds properly?

Sitaram Singh
← Previous Story Tajinder Bagga does it again this time with Delhi Archbishop sends a gift with a Hilarious message
Next Story → ‘Yeshu ki maya’: A song that slams the Archbishop and the conversion tactics used by missionaries