/> Why did Shree Krishna not save the Pandavas when they played dice with Duryadhana & Shakuni? - IndSpice 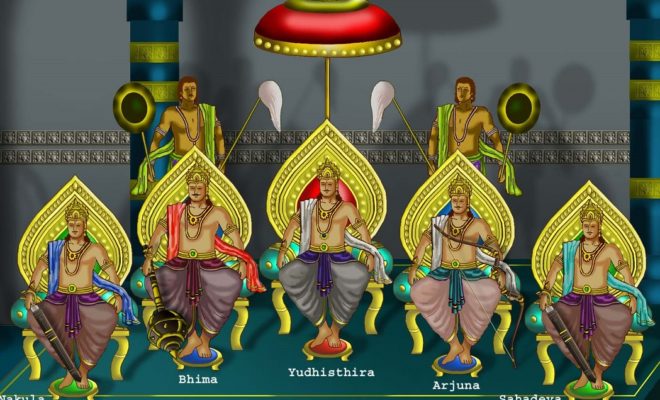 Why did Shree Krishna not save the Pandavas when they played dice with Duryadhana & Shakuni?

Wonderful explanation by Shree Krishna himself:

From his childhood, Uddhava had been with Shree Krishna, charioting him & serving him in many ways. He never asked for any wish or boon from Shree Krishna! When Shree Krishna was on the verge of completing His Avatar, he called Uddhava & said, ‘Dear Uddhava, in this Avatar of mine, many people have asked & received boons from me; but you never asked me for anything! Why don’t you ask for something now? I will give you. Let me complete this Avatar with the satisfaction of doing something good for you also!’

Even though Uddhava did not ask for anything for himself, he had been observing Shree Krishna from his childhood. He had always wondered about the apparent disconnect between Shree Krishna’s teachings & actions & wanted to understand the reasons! He asked Shree Krishna, ‘Hey Shree Krishna, you taught us to live in one way, but you lived in a different way yourself! In the epic War of Mahabharata, in the role you played & in your actions, I did not understand many aspects! I am curious to understand the reasons for some of your actions! Would you fulfill my desire to know the deeper significance of some of your decisions pls?’

Shree Krishna said, ‘Uddhava, what I told Arjuna during the War of Kurukshetra will be well-known as the Bhagavad Gita! Today, my responses to you would be known as ‘Uddhava Gita’! That is why I gave this opportunity to you! Pls, ask me without hesitation!’

Shree Krishna says, ‘A real friend is one who comes to the help of his friend in need, even without being called upon!’

Just now you gave me your definition of a true, close friend!Then why did you not act as per your own definition?

Why didn’t you stop Dharmaraj Yudhishthira from playing the gambling game of the dice? Ok, you didn’t do it! why did you not turn luck in favour of Dharmaraj, by which you would have ensured that Dharma wins? You did not do that also!

You could have at least saved Dharmaraj by stopping the dice game after he lost all his wealth, his kingdom & himself! You could have released him from the punishment for worthless gambling!

And you could have entered the hall when he started betting his brothers! You did not do that either!

At least, when Duryodhana tempted Dharmaraj by offering to return to him everything he lost if he betted Draupadi (who always brought good fortune to the Pandavas), you could have intervened & with your divine power, you could have made the dice roll in a way that is favorable to Dharmaraj! Instead, you intervened only when Draupadi almost lost her modesty & now you claim that you gave her clothes & saved Draupadi’s honour & modesty! How can you even claim this, after her being dragged into the hall by a man & disrobed before so many people & elders in the Family? What honour & modesty are left for a woman after that? What have you saved?

Only when you help a person during a crisis, can you be called ‘Apadhbandhava’! If you did not help in the time of crisis, what is the use? Is it Dharma?’

As Uddhava posed these questions, tears started rolling down his eyes.

These are not the questions of Uddhava alone. All of us who have read the Mahabharata have these & similar questions! On our behalf, Uddhava has already asked Shree Krishna!

Shree Krishna laughed. ‘Dear Uddhava, the law of this world is: ‘only the one who has Viveka (intelligence through discrimination), wins’!

While Duryodhana had some elements of Viveka, Dharmaraj lacked it. That is why Dharmaraj lost!’

Uddhava was lost & confused! Shree Krishna continues, ‘While Duryodhana had plenty of money & wealth to gamble, he did not know how to play the game of dice! That is why he asked & used his Uncle Shakuni to play the game while he betted! That is Viveka!

Dharmaraj also could have thought similarly and offered that I, his cousin, would play on his behalf!

If Shakuni & I had played the game of dice on opposing sides, who do you think would have won?

Could he have rolled the numbers I am calling or would I roll the numbers he is asking for?

Forget this. I can forgive the fact that he forgot to include me in the game! But without showing any Viveka, he committed another blunder! He prayed that I should not come into the hall as he did not want me to know that through ill fate, he was compelled to play this game!*

He tied me up thru his prayers & did not allow me to get into the hall; I was just outside the hall waiting for someone to call me through their prayers! Even when Bheema, Arjuna, Nakula & Sahadeva were lost, they were only cursing Duryodhana & brooding over their fate; even they forgot to call me!

Even Draupadi did not call me when Dusshasan held her hair & dragged her to fulfill his brother’s order! She was also arguing in the hall, based on her own abilities! She never called me! Finally, good sense prevailed! When Dusshasan started disrobing her, she gave up depending on her own strengths & started shouting ‘Hari, Hari, Abhayam Krishna, Abhayam’ & shouted for me! Only then I got an opportunity to save her modesty! I reached as soon as I was called & I was able to save her modesty! What is my mistake in this situation?

‘Wonderful explanation, Kanha, I am impressed! However, I am not deceived! Can I ask you another question?’, says Uddhava.

‘Does it mean that you will come only when you are called? Will you not come on your own to help people in crisis, to establish justice?’, asks Uddhava.

Shree Krishna smiles. ‘Uddhava, in this world everyone’s life proceeds based on their own karma. I don’t run it; I don’t interfere with it. I am only a ‘witness’. I stand close to you & keep observing whatever is happening. This is God’s Dharma’!

‘Wow, very good, Shree Krishna! In that case, you will stand close to us, observe all our evil acts; as we keep committing more & more sins, you will keep watching us! You want us to commit more blunders, accumulate sins & continue to suffer’, says Uddhava!

Shree Krishna says.’Uddhava, pls realise the deeper meaning of your statements. When you understand & realise that I am standing as a witness next to you, how could you do anything wrong or bad? You definitely cannot do anything bad! You forget this & think that you can do things without my knowledge? That is when you get into trouble!

Dharmaraj’s ignorance was that he thought he can play the game of dice without my knowledge! If Dharmaraj had realized that I am always present with everyone in the form of ‘Sakshi’ (witness), then wouldn’t the game have finished differently?’

He said, ‘What a deep-rooted philosophy! What a great realisation of truth! Even praying & doing Pooja to God & calling Him for help are nothing but our feeling, faith & belief!

When we start believing that nothing moves without Him, how can we not feel his presence as Witness? How can we forget this & act?

Throughout the Bhagavad Gita, this is the philosophy Shree Krishna has imparted to Arjuna. He was the charioteer, as well as guide for Arjuna, but he did not fight on his own.’*

Realize that ultimate Sakshi or Witness within & beyond you! And merge within that God Consciousness!

Discover Thy Higher Self! The Pure, Loveable & Blissful Supreme!