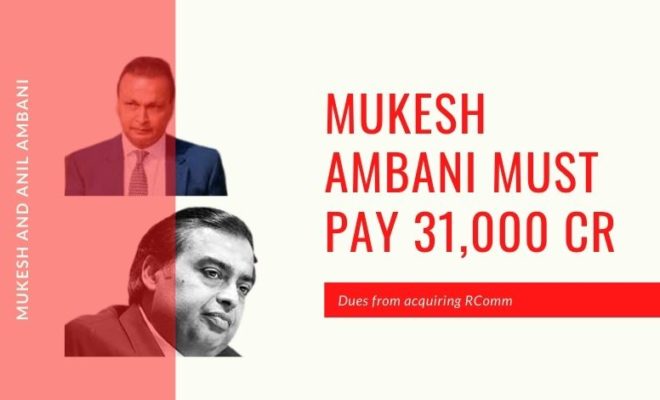 August 14-Friday – is a bad day for Mukesh Ambani. He has been caught by the Supreme Court for evading to pay the dues of his debt-ridden brother Anil Ambani’s company which currently owes more than Rs.31,000 crores to Department of Telecom. During the arguments on the controversial Telecom AGR (Adjusted Gross Revenue) non-payment issue, the Supreme Court found that Mukesh Ambani’s Reliance Jio is using the spectrum of Anil Ambani’s Reliance Communications (RComm) since 2016.
Anil’s RCommm is almost taken over by Mukesh at zero value by taking over its assets on the condition that it will also take up liabilities.

Reliance Jio recently got a bumper of more than Rs.1.5 lakh crores by selling some portions of itself to many multinational companies such as Facebook, Google etc. Here the role of Government is also dubious as it did not collect the dues from these big telecom players. Even after winning the case in the Supreme Court we have seen what all dubious activities done by the Narendra Modi Government by not collecting dues from the Ambanis, Birla, Mittal, Tata Group etc. The strange thing is that even Opposition parties are not criticizing the Government for these dubious activities in helping Corporates!

The Supreme Court on Friday sought details of the spectrum sharing pact between Reliance Communications (RComm) and Reliance Jio and said as to why the company using the spectrum of the other firm cannot be asked to pay the Adjusted Gross Revenue (AGR) related dues to the government.

“Spectrum is government property, not private, and anyone using it is liable to pay the dues”, the apex court said. The bench of Justices Arun Mishra, S Abdul Nazeer and M R Shah asked the counsels of Reliance Jio and RComm to place their spectrum sharing agreements on record.

The bench also asked the Department of Telecom (DoT) to file the requisite documents in this regard and posted the matter for further hearing on August 17.

During the hearing, senior advocate Shyam Divan, appearing for the resolution professional for RComm, said that the government has been informed about the spectrum sharing agreement which was done in 2016 and the required fees have been paid. He said that a part of the spectrum was lying idle with the company for a while and it has not been traded but has only shared.

The bench then said as to why it cannot ask Reliance Jio to pay the AGR related dues on behalf of RComm as the outstanding amount arises from the spectrum use and Jio has been using it for three years. When Divan stated that the lenders have approved UV Asset Reconstruction Company’s resolution plan for RComm, the bench said it wanted to know who was backing the UV ARC.

Senior advocate K V Vishwanathan, appearing for Jio, said that the company has already paid its AGR related dues but on this question, he needs to seek instructions. He tried to explain to the bench the spectrum sharing and spectrum usage guidelines, and said that the company was following all the rules and paying the requisite fees.

The bench said again as to how Reliance Jio can escape the liability when it is using the spectrum and sharing the revenue?

The top court is expected to allow 15 years time for telecom firms to pay the dues, rejecting Government’s 20-year offer. Vodafone Idea has to pay a balance of Rs 50,399 crores, while Bharti Airtel’s outstanding amount is Rs 25,976 crores, Solicitor General Tushar Mehta said during a hearing on July 20.

Now Supreme Court is looking into the dues of bankruptcy-facing firms like Anil Ambani’s RComm (whose spectrum is being used by Mukesh Ambani’s Jio), Videocon and former Finance Minister Chidambaram’s bribery scam-hit Aircel.