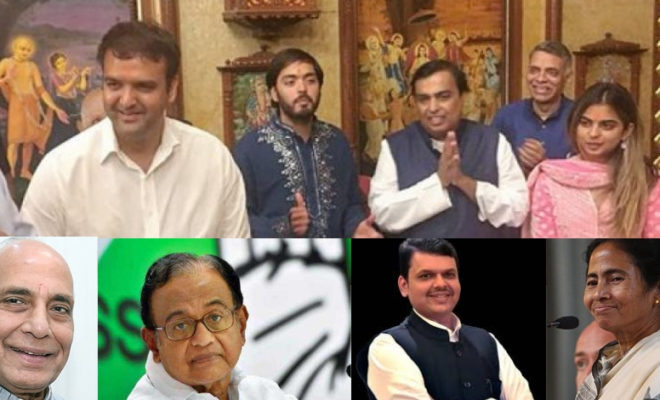 The Ambani-Piramal wedding , which Bloomberg said was estimated to have cost $ 100 million, was attended by Union home minister Rajnath Singh, former FM P Chidambaram, Mamata Bannerji, Devendra Fadnavis and scores of other chota-mota politicians. It did not matter to them that an orphanage stood at the place where Mukeshbhai Ambani decided to build his super palatial home at a reported cost of Rs 1, 600 Cr. If they lack sensitivity it’s their problem.

However, it is most objectionable that they attended the wedding even as the Modi govt has filed a case in Delhi high court accusing Mukeshbhai’s Reliance Industry Ltd ( RIL) and its two partners of committing “insidious fraud” and “unjust enrichment” of a whopping $ 1.729 Billion!!! The govt has alleged that gas rightfully belonging to ONGC has been stolen from the Krishna Godavari Basin (KGB). It has alleged that a criminal offence is involved.

The govt, in its petition, told the court that “The unjust enrichment amassed by the contractor had already reached more than $1.729 Billion today, and is since increasing as the production of migrated gas is still continuing.” So the “insidious fraud” is still continuing. The govt’s petition challenges an international award granted 2:1 favouring RIL. Earlier, independent international consultants of repute and the Justice A.P. Shah Committee had confirmed the “insidious fraud.”

But all this did not deter the assortment of politicians from flocking to Antila to greet the couple. The presence of Rajnath Singh is particularly objectionable since he is a senior member of the Modi govt which has filed the case against RIL.  ONGC is a PSU and the $ 1.729 Billion right belongs to the people of India. Maybe PM Modi did not turn up because of the high impropriety involved.

The UPA govt, of which Chidambaram was a part, had filed the case against RIL just a day before the LS election of 2014. The matter then went in for arbitration.

The govt has not taken action against any official of ONGC and the Directorate of Hydrocarbons who allegedly abetted in the criminal offense nor has any criminal case been filed against RIL.  Efforts by me to obtain information under RTI were stonewalled by ONGC. The media is not highlighting this massive case of “insidious fraud’ because Mukesbhai has major stakes in the industry.