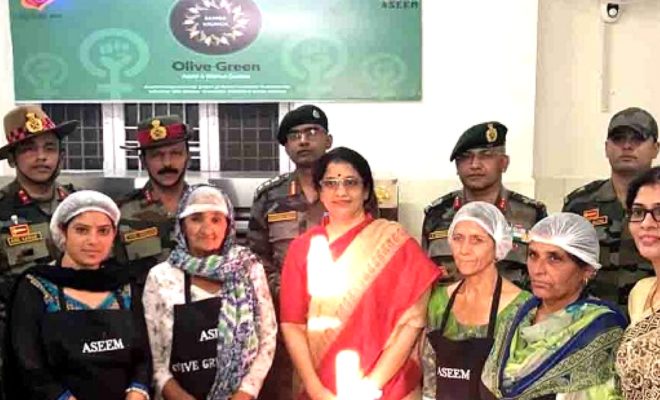 Olive Green Cookies: You Can Help Army Widows By Eating These Delicious Biscuits!

When we talk of Jammu & Kashmir all that comes to our mind is the strife that is going on there, the agitations, stone pelting, terrorists being shot dead, army men losing lives…….. a population that feels disgruntled, and politicians making their career over this turmoil. But every now and then, there comes a story of goodness, struggle, and success that emanates from that soil. One such was the story of Sehmat portrayed beautifully in the recent movie Raazi played by Alia Bhatt or the grit showed by Sepoy Aurangzeb before his death in the hands of terrorists.

There is another one that caught my attention recently. It is from the Jammu region of Samba. What was one thing common among seven women – 55-year-old Biaso Devi & Chanchalo Kumari, 60-year Prakasho Devi, 56-year Sheeshna Kumari, 58-year Parkasho Devi & Gharo Devi and 26-year-old Simmi Devi. They all were widows whose husbands had served in the Indian Army. After the death of their husbands, each one of them had a tale to narrate, one of suffering, loneliness, and lack of finances. Each one struggled to make ends meet and look after their kids and family.

The Army in the local garrison was already well known for its close interaction with the local population. They had made a mark consistently guided by the Rising Star Corps HQ, Gurj Division and the Mission First Brigade who were well known for their Samba Super 40 academic excellence mission wherein the local boys and girls had qualified for central competitive exams. That story is for another day.

The area is well known for walnuts and apples. Who doesn’t relish these goodies? While interacting with the locals one day and after listening to the sad stories of the widows, Brigadier Anil Raman hit upon the idea. Why not do something with the local resources and ensure the product be marketed well so that there is an employment generation opportunity.

Aseem foundation, an NGO from Pune, has great experience of more than

15 years. They know and understand local problems in states like Jammu and Kashmir and the North-Eastern states. Aseem Foundation worked with the Army to establish the Olive Green Bakery at Samba under the aegis of Army Wives Welfare Organisation. The initiative involved a manufacturing point at Samba Military Station for special Apple Walnut Chocolates, Caramel Walnut Chocolates and Walnut Biscuits. All help was provided by the Army under Operation Sadbhavana. With the knowledge imparted by the Aseem Foundation members, the local produce of Apples and Walnuts were made into Apple Walnut Cookies under the brand name Olive Green Cookies.

These were then marketed all over India. You too can order your cookies. From today, let these cookies give you company along with your cuppa tea. It just costs you Rs 55/- for a box of tasty fresh 10 cookies. And it is delivered to your house by courier.

Green Bakery. Today Simmi Devi proudly pays school fees of her daughter and takes care of her needs. Prakasho Devi is able to pay school fees of her two grandchildren and also cater to their daily requirements. Chanchalo Kumari is able to help her son in day to day running of the house.   A week back Biaso Devi filled up admission form worth Rs 2000/- for her daughter Arti Devi from her first salary. These women are now beaming at this God sent opportunity and thank the Army for this new lease of life. A life of purpose, dignity and peace. Three more joined in later hearing about the new lease of respectable life this project has given them.

This Independence Day, You too can do your bit. Buy your cookies from them. Help these brave widows of Samba to sustain their lives with dignity. Get your first order going here  http://www.aseemfoundation.org/olivegreen.html

Every bite you take goes into making a future for these soldier’s widows. Its time for my Cuppa tea with Olive Green Cookies.