/> CM Yogi gets full backing and Credit from Dr. Swamy as Media tries to blame Yogi for Bypoll loss - IndSpice 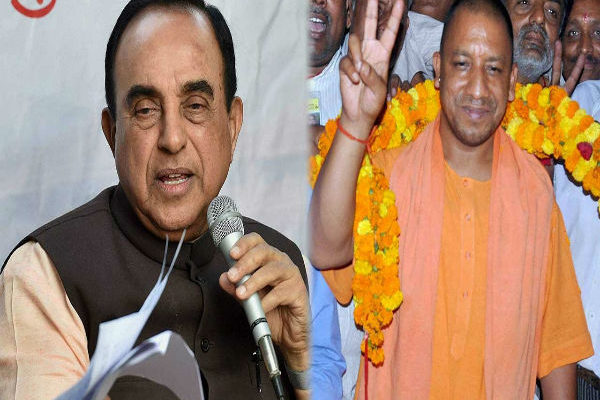 CM Yogi gets full backing and Credit from Dr. Swamy as Media tries to blame Yogi for Bypoll loss

BJP MP Dr Subramanian Swamy has come to the defence of Uttar Pradesh Chief Minister Yogi Adityanath over the criticism that the latter has received in light of the BJP’s recent bypoll losses in the state.

Dr Swamy has alleged a conspiracy in the treatment meted out to Yogi Adityanath in the media in light of the BJP’s Lok Sabha bypoll loss to the united Opposition-backed RLD candidate in the Kairana Lok Sabha seat, and to the Samajwadi Party candidate in the Noorpur Assembly seat.

The Rajya Sabha MP has said that if Yogi Adityanath is to be blamed for the ‘fiasco’ in Uttar Pradesh, then he should also be credited for the BJP’s turnaround in the Karnataka Assembly elections. In the critical state polls, the BJP emerged as the single-largest party in the state, leaping from 40 seats to 104 seats.

Yogi Adityanath had campaigned in Karnataka, drawing flak from then Chief Minister Siddaramaiah who advised him, and none-too-politely, to serve his own state. Dr Swamy, however, has given Adityanath his backing saying that the current government has given Uttar Pradesh the best law and order in 40 years.

Media (at whose behest?) is blaming Yogi for the fiasco in UP bye elections. This is unfair. If not why Karnataka general election turn around of BJP going from 45 to 104 is not credited to him? All of UP says Yogi given UP the best law& order in 40 years.

Earlier, in March, the BJP had lost in the bypolls to the Gorakhpur and Phulpur Lok Sabha seats that had been vacated by Yogi Adityanath and Deputy Chief Minister of UP Keshav Prasad Maurya. At that time, long-time rivals Samajwadi Party and Bahujan Samaj Party (BSP) had come together.

He said, “The BJP contested assembly polls with Keshav Prasad Maurya (a OBC) as its face but later Yogi Adityanath was made chief minister. Backwards supported the BJP in the hope that Maurya will become CM. The result of this anger reflected in the defeat of the BJP in bypolls.”

He further added, “Government is responsible. The BJP should introspect about reasons for its defeat. It’s up to the BJP whom to make CM. It’s up to the party to make Yogi or Keshav as CM.”