/> Shocking discovery of over 10,000 voter ID cards found in an apartment, PM Modi hits out at Congress - IndSpice 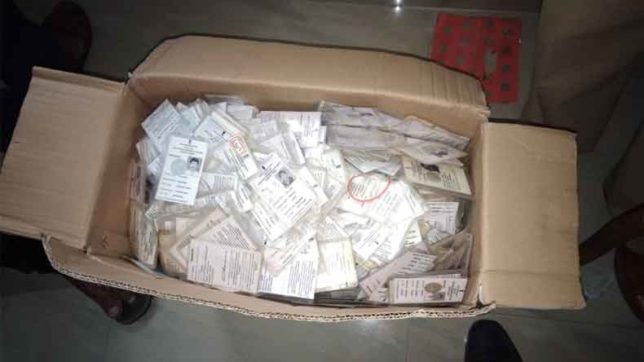 Shocking discovery of over 10,000 voter ID cards found in an apartment, PM Modi hits out at Congress

The Election Commission of Karnataka on Tuesday confirmed that they recovered 9,746 electors photo identity cards from an apartment in Bengaluru’s Jalahalli area, which falls under the Raja Rajeshwari Nagar constituency. In a midnight briefing on Tuesday, Chief Electoral Officer for Karnataka Sanjiv Kumar said that according to the preliminary verification, the ID cards were of actual electors and appeared to be prima facie genuine.

According to the state election commission, the voter ID cards were kept neatly in small bundles that were wrapped in paper, with some names and phone numbers on the paper.

The recovery was made during a surprise visit to Parkview apartment in Jalahalli area, which belongs to Manjula Nanjamuri and was allegedly rented to a person named Rakesh.

Prime Minister Narendra Modi has pointed fingers at the fake voter controversy at a rally in Chikmagalur. He said “Sensing defeat, the Congress is thrashing about like a fish out of water and is hence conspiring now. Media reports since yesterday speak of thousands of fake voter cards and how they were added. Thousands of such cards were seized, the computer and printing machine were seized. Teach the Congress a lesson for its efforts to try and win the election using fake voter cards: Modi

Apart from the IDs, five laptops, one printer, and two large steel trunks with counterfoil strips resembling acknowledgement slips of Form 6 used for addition of names onto the electoral rolls were also recovered from the apartment during the raid. Kumar added that the significance of the counterfoils can only be verified after due investigation.

“These may be numbering around a lakh. There is a need for further verification and inquiry. These have photographs and a printed number in magenta colour which is different than the officially available Form 6 which has no printed number,” Kumar said.

The state election commission added that an FIR has been registered in the matter and further investigations will be conducted on the same. It further assured that in the next 24 hours, when more information is available, firm action will be taken.