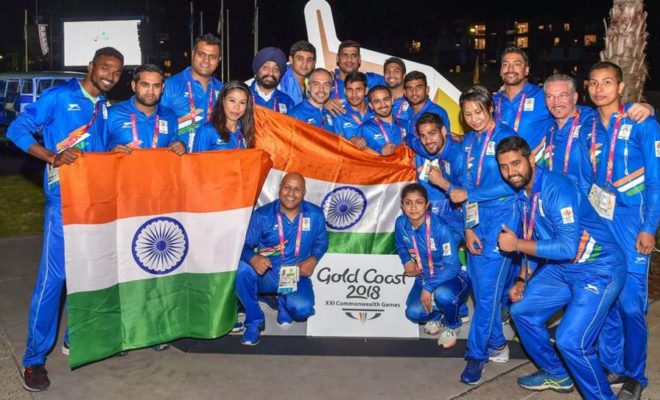 Day five of the 2018 Commonwealth Games at Gold Coast, Australia has seen India’s sportspersons extend to 19 the overall medal tally. In shooting, Jitu Rai won gold in the men’s 10m air pistol followed by bronze for Om Mitharval, and then came silver to teenager Mehuli Ghosh in the final of the women’s 10m air rifle event where defending champion Apurvi Chandela settled for bronze.

In weightlifting, Pardeep Singh claimed silver in the 105kg final and later, the men’s table tennis team emulated the women from yesterday with another gold medal. Shortly after that, the mixed badminton team clinched the country’s first CWG gold in this event, giving India its 19th medal.

At the Belmont Shooting Centre, Jitu – a CWG gold medalist four years ago in Glasgow – shot a Games record total of 235.1 after entering the eight-man final at fifth place in qualifying. Coming in at third place after silver medalist Kerry Bell of Australia (233.5) was Mitharwal with 214.3. 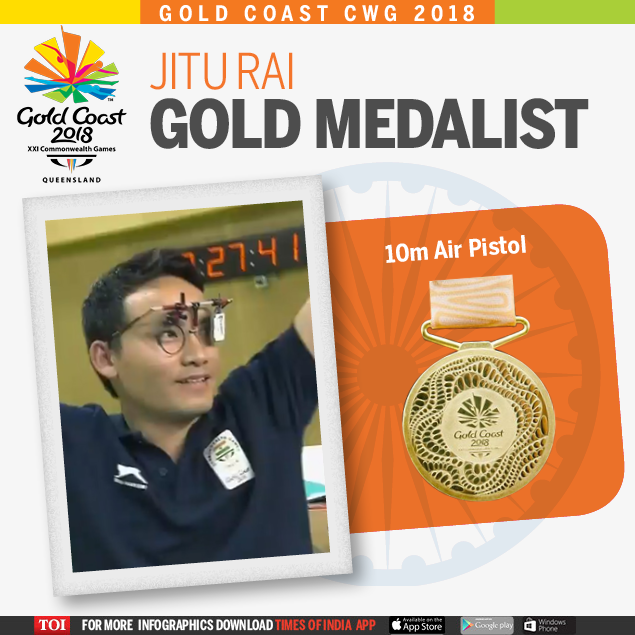 Mehuli had followed Apurvi, who topped the qualification round with a CWG qualifying record total of 432.2, into the final at fifth place in qualification with a total of 413.7. In an excruciating last few moments of the eight-member final, the 17-year-old surpassed Apurvi and engaged in a shoot-off with Singapore’s Martina Lindsay Veloso once the two shooters finished level on 247.2. Veloso’s final shot was worth 10.3, while Mehuli’s was 9.9. It is an extremely satisfying performance from the young Bengal shooter in her first appearance at the CWG.

Having won gold in the same event four years ago at the Glasgow CWG, the 25-year-old Apurvi settled for bronze after she finished with 225.3 points, second to Mehuli’s 247.2 . India have so far won seven medals in shooting in the span of about 24 hours, following teenage prodigy Manu Bhaker’s gold and Heena Sidhu’s silver in the women’s 10m air pistol final and Ravi Kumar’s bronze on the 10m air rifle event.

At the Carrara Sports Arena 1, weightlifter Pardeep, aged 22, lifted a total of 352kg (152 in snatch and 200 in clean & jerk) to take silver behind Samoan Sanela Mao who won gold with a total effort of 360kg (154 + 206). This was the ninth medal for India’s weightlifting contingent. 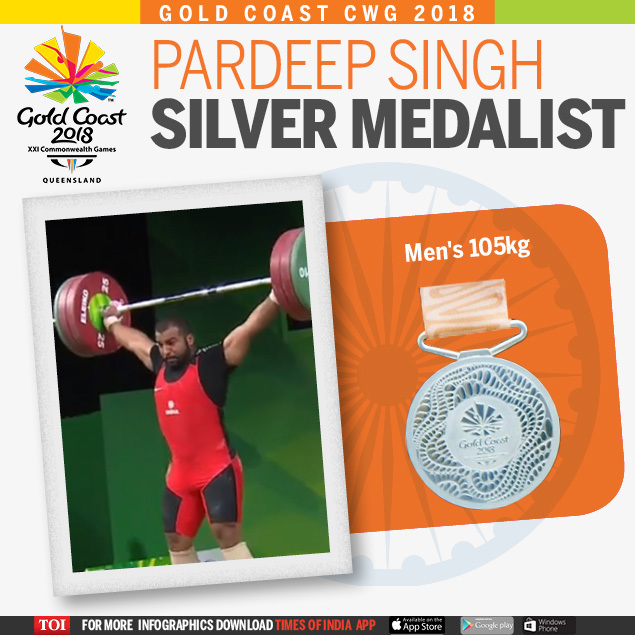 In table tennis, India’s men’s team combined brilliantly to deliver the country its second gold medal at the CWG with a 3-0 win over Nigeria. Leading the way was the experienced Achanta Sharath Kamal who beat Bode Abiodun 4-11, 11-5, 11-4, 11-9, before the top-ranked Indian paddler Sathiyan Gyanasekaran dispatched Segun Toriola 10-12, 11-3, 11-3, 11-4 to put India up 2-0. Pairing up with Harmeet Desai in the men’s doubles category soon after, Sathiyan confirmed India’s gold medal with an 11-8, 11-5, 11-3 win over Abiodin and Olajide Omotayo.

This was followed by India’s mixed badminton team defeating Malaysia 3-1. Putting India on course for gold was the mixed doubles’ pair of Satwik Rankireddy and Ashwini Ponnappa who won the mixed doubles’ section; then it was Srikanth’s turn to beat Lee Chong Wei in straight games 21-17, 21-14. After the men’s doubles duo were beaten in straight games, Saina completed India’s gold medal by beating Soniia Cheah 21-11, 19-21, 21-9.

From the athletics pool, high jumper Tejaswin Shankar qualified for the final after he finished sixth in the Group A and Hima Das also entered the women’s 400m final after finishing third in her heat with a personal best of 52.11s. Later in the day, Mumahhad Anas qualified for the final of the men’s 400m final with the third fastest time (45.44 seconds) of all participants.

Loganathan Suriya claimed a personal best timing of 32:23:56 in the women’s 10,000m final where she finished 13th out of 19 contestants. In the men’s shot put final, Tejinder Singh finished eighth out of 12.

In the women’s 90kg and 90+kg weightlifting events, India’s Lalchhanhimi and Purnima Pandey bowed out of medal contention after the snatch phase with scores of 85kg and 94kg, respectively. In heat 1 of the women’s 400m round 1, Poovamma Raju Machettira finished fifth out of eight runners, while in the men’s 200m backstroke heat 2 Srihari Nataraj came in sixth out of seven swimmers. Virdhawal Khade also failed to qualify for the men’s 50m freestyle final, finishing sixth out of eight swimmers. Weightlifter Gurdeep Singh finished fourth in the men’s 105+kg final.

At the Belmont Shooting Centre, the only Indian to qualify for the final of the men’s skeet event, Smit Singh, shot 15 to become the first finalist eliminated. His compatriot Sheeraz Sheikh shot 117 to finish 10th in qualification.