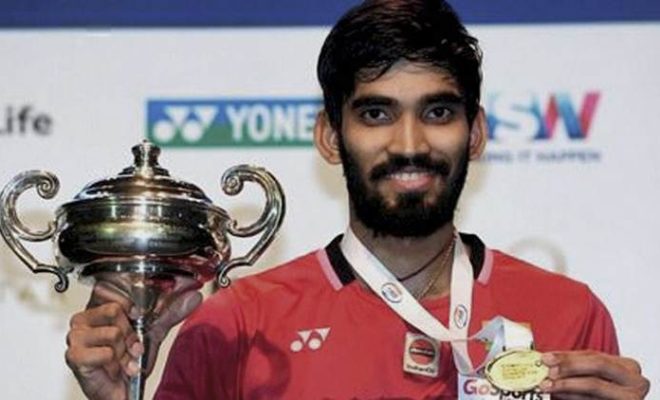 Ace Indian shuttler Kidambi Srikanth, who has been one of the world’s most dominating shuttlers in the last few years, on Thursday achieved a massive milestone as he became the first Indian male shuttler to become Word No. 1 in BWF rankings. Srikanth, who is currently playing in Commonwealth Games 2018, has become the second Indian shuttler after Saina Nehwal to achieve the numero uno spot in badminton rankings.

The rankings are calculated on the basis of the player’s performances in the previous 52 weeks, which means that reigning World No. 1 Viktor Axelsen is poised to lose 1660 points as he is currently nursing an injury and will be unable to defend his Malaysian Open title which he won last year. Srikanth, on the other hand, is set to take his place on the top of the charts, creating history in the process and highlighting the incredible pace at which the sport has grown in the country in recent times.

The 25-year-old has become just the second Indian shuttler to have scaled the top of the world rankings, with London Olympics silver medalist Saina Nehwal achieving the feat three years ago. Srikanth had achieved a career-best ranking of number two towards the end of last year and could have claimed the numero uno spot earlier but an unfortunate injury kept him out of action.

The man from Guntur had the best season of his career in 2017, where he reached as many as five Super Series finals and won an astonishing four out of those, making him just the fourth player in history to do so. His title wins came in Indonesia, Australia, Denmark, and France, where he recorded multiple wins against higher-ranked opposition.Most recently, he played a key role in securing India’s first-ever gold medal in the mixed team event at the Commonwealth Games on Monday, where he defeated the legendary Malaysian Lee Chong Wei in the men’s singles rubber and paved the way for the Indian side to win gold.