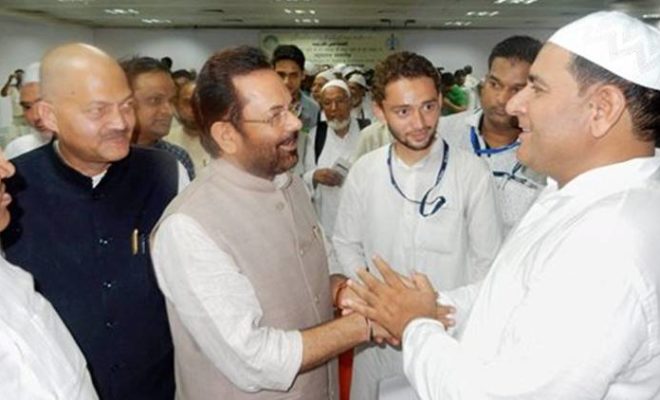 In a big move, the government on Tuesday abolished subsidy for Haj pilgrims. Minority Affairs Minister Mukhtar Abbas Naqvi made this announcement. Naqvi also told reporters that despite the subsidy withdrawal, a record number of 1.75 lakh Muslims will undertake the pilgrimage this year. The decision to abolish Haj subsidy comes a day after the government allowed Muslim women, above the age of 45, to go on haj without a male guardian, in a group of at least four.

The Ministry of Minority Affairs had last year, constituted a committee to review the existing Haj policy and suggest a framework for a new Haj policy for 2018-22.

Naqvi also said that the Saudi Arabian government has in principle agreed to allow Haj journey from India by ships and officials of the two countries will sit together to finalize the modalities. “This is part of our policy to empower minorities with dignity and without appeasement,” Naqvi told reporters and cited a host of measures for the welfare of minorities.

Last year, Naqvi had said that the Centre would abolish the subsidy for Haj pilgrims in accordance with a Supreme Court order.
“A constitutional bench of the Supreme Court had, during the Congress regime in 2012, directed that the Haj subsidy is done away with. Hence, in the new policy, as per the recommendations of a committee, we have decided to do away with the Haj subsidy gradually,” he had said.