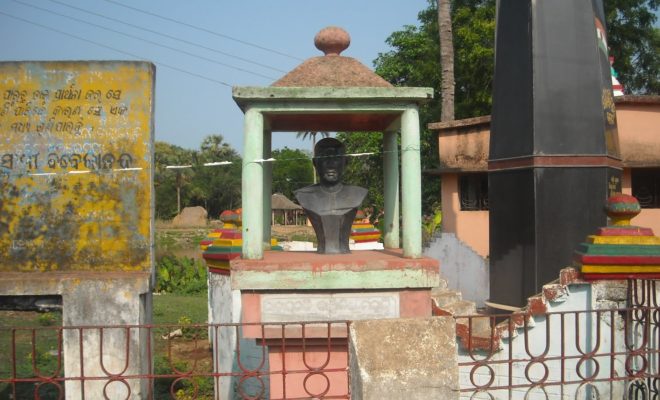 The Jallianwala Bagh 2.0 we shouldn’t forget

Another glorious chapter does not even feature in the annals of Indian history, thanks to the left-leaning historiographers. Seventy-five years ago, on 11th August, 29 freedom fighters were killed by the bullets of British police in Odisha’s Eram.

Eram, a place about 15 km from here in Bhadrak district is regarded as the Rakta Teertha (a place of pilgrimage tinged with the blood of martyrs), is a glorious chapter in Indian freedom movement.

Be it Quit India Movement or Non-cooperation Movement called by Gandhiji, people of Basudevpur played an active role. However, the massacre of freedom fighters at Eram is considered as the second Jallianwala Bagh of India. British police opened fire on a gathering at Eram September 28, 1942, when people were protesting the foreign rule peacefully. As many as 29 people died and 56 injured in the firing. Unfortunately, the incident couldn’t hug limelight at the national level and historians failed to place it in the annals. Though 72 years have passed since the fateful incident, Eram, a place that bears testimony of the sacrifice of the Patriots is yet to be recognized as a national memorial. However, the government has declared it a tourist destination which is nothing but a crude joke on the martyrs. Accordance of a national memorial to the site would salvage some respect of the land, locals said.

Eram Massacre
On a fateful day, more than 10,000 people without having arms had gathered under the leadership of Kamala Prasad Kar on a field to protest the British rule. However, he was removed from the meeting site and another freedom fighter Ganesh Prasad Tripathy addressed the gathering as it was learned that the police had planned to arrest Kar. The British Police from the local police station had to operate the boat themselves to cross the river as boatman Kusha Tarai refused to ferry them. The news of the arrival of police spread in the area.

Manibej, a local freedom fighter snatched clothes of some policemen and urinated on them. The act got thundering applause while the whole meeting ground got ignited with the slogan of ‘Vande Mataram’. Infuriated over the development, the British police opened fire at people killing 28 on the spot and injuring 56 others. Another person died in Koraput jail. Pari Bewa was the first woman to attain martyrdom in police firing. Similarly, 13-year-old Biruli Das was the youngest of the martyrs.

It is said that Banchhanidhi Mohanty, a local revolutionary poet, through his poems, had instilled the mantra of nationalism among the locals. Following his demise in 1938, the freedom fighters formed an Independent nation named ‘Banchhanidhi Chakla’ comprising 27 villages of six panchayats with an area spreading across 19 square miles. Gouranga Chandra Mohanty was nominated as the President and Kamalaprasad Kar as Prime Minister of the newly-formed nation. The nation had its own army, intelligence and ammunition depot which had caught the Britishers by surprise.

Educationist Radhakrushna Palei has demanded the government to declare the site as the national memorial and take steps for social and economic development of the descendants of the martyrs.

Sitaram Singh
← Previous Story A big break and Win for Dr Subramanian Swamy in Sunanda Pushkar case
Next Story → Meet Jinnah 2.0 who says Muslims should demand a separate nation for themselves